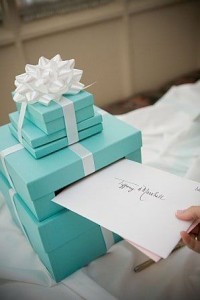 My expertise is sought for many a non essential knowledge. Most likely it’s because I am a self-proclaimed authority on appropriate behavior aka etiquette. Recently a friend posed the following question:

Q: A close friend of mine who eloped near a year ago has decided to host a 1 year anniversary party in which she plans to register for *wedding* gifts.  Am I wrong in thinking this is odd to deliberately exclude everyone from your wedding (including family members) but then expect to be showered with gifts a year later?

Naturally I was mildly horrified at the mere suggestion of expecting wedding-like gifts to be bestowed upon the offending couple. I supplied the following reply:

A: Registering for 1yr anniversary is absurd and tacky.  If the couple wanted presents, they should have had a party immediately after they eloped.  As a guest you should be under zero obligation to bring a gift to their party.  If you feel uncomfortable attending empty handed, I suggest making a charitable donation in their honor. It’s a little passive/aggressive, but who is going to be upset that you thought the gift of money should go to a more deserving party.

What’s your take on this situation? Have you ever experienced this or have you been guilty of it?
Telling it like it is…
xxoo.