Yes, you read that blog title correctly. The Fire Roasted Tomato & Olive Oil Triscuit is so piquant that you will break out in a little boogie and that I am dedicating an entire partiejeanie blog to this baked golden square of wholesomeness. Once you try this tangy Triscuit flavor, i guarantee you will be in full agreement (and possibly cutting a rug).

A couple nights ago, I aimlessly entered the Food Emporium en route home from a night of musical theatre. I thought I would stock up on my specific brand of peanut butter – that is for another blog entry. I had a hankering for a cracker like experience and noticed Triscuits were on super sale and having a fondness for the woven wheat wafer, especially as a child dipping the corners into my bowl of Campbell’s ABC soup, I decided to grab a box of what seemed to be a tasty option. Little did I know the flavor explosion my taste buds encountered would set off a chain reaction throughout the weekend.

The first unsuspecting causality of this culinary wizardry is someone who doesn’t boast an epicurean pedigree. Originally I had thought he was just famished and that the savory blend of spices was enhanced by his lack of food consumption. However when he exclaimed these crackers was the best thing he had ever tasted and that his intention was to finish the entire box (approximately 10 servings), I realized my initial reaction had been validated. 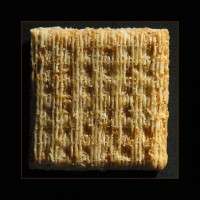 A day and few crackers later, my bestie was over to assist in creating excel spread sheets for my 2011 tax receipts (excel formulas are not in my repertoire) and I offered her a cracker or two for her efforts – generous, I know. She too, commented how incredibly delicious this little crisp of tang was and insisted we pick up a box for our friend’s Mad Men marathon that was scheduled later in the day. For the record, the BFF has an exceptionally sophisticated palette and was once married to a classically trained chef and is daughter of an international cake decorator.

Once our darling hostess tasted these crunchy morsels of delectability, she too began to plot a grocery store run to stock up before the sale ended. And when her husband, a graduate and one time employee of The French Culinary Institute began to nibble on the Triscuit du jour, he literary broke out in dance over the exuberance of flavor commingling in his mouth.

So, when I tell you the Fire Roasted Tomato & Olive Oil Triscuit will get your toes tapping, hips shaking, shoulders shimmying and mouth watering, I have the gourmand corroboration to substantiate this assertion.

Go grab a box; your mouth will thank me.
xxoo.

Spending Sunday on the sofa? The covid forecast

3 steps how to keep a rug in place, avoid tripping

I wasn’t sure I was going to post this or not, b

Feeling the Philly ♥️ Was in my hometown for

FRIDAY FAVORITE: TAB No words. You will be missed