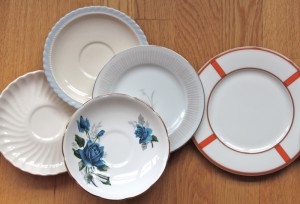 Being creative doesn’t always mean being original.  It means you are pretty skilled in the art of stealing someone else’s idea and manipulating (rather building, embellishing, re-working – whatever euphemism applies) to suit your own desired effect.  In the visual community this is acceptable and expected, in other industries it may get you a trial among your peers.

So, I am fully disclosing the fact I did not conceive the concept of using saucers as picture frames as awesome of an idea it is.  I just took it to a new level.   I spied the saucer photo frames on a blog dedicated to all things Mod Podge well over a year ago.

I tried to find the original blog from which it came and I even spent an evening diligently going through the aforementioned blog’s archives to locate the source.  Nada.  I feel a little lame not giving the appropriate credit to the artful author, but I am mentioning someone else’s blog on my second outing so hopefully that will counter any bad blog karma.

I wanted to create birthday present for someone who was celebrating a milestone birthday (ok, I guess should come clean since this blog is all about honesty and accountability – the birthday belongs to my mother.) – a collage highlighting different decades of her life.  Instead of making a bunch of individual frames that would lose the visual impact if displayed separately, I had designed a method of exhibit that would give a sense of fluidity and significance to this major anniversary.

The intention in my blog is not only to introduce the reader to something unique and accessible, but always show where I may have failed or stumbled and to provide tricks and advice how not to screw up.

I would say I am well versed in the properties and application of a myriad of glues.  E6000 is a super stinky industrial strength adhesive that has never disappointed until this project.

Perhaps it was the curvature of the saucer edge or the minimal area of overlapping china that prevented accurate adhesion, but I had to cover the previously glued areas with white electrical tape and an extra dose of Duco cement glue. So lesson to be learned: try to locate the flattest saucers if creating collage or allow for serious overlapping.

Other helpful hints for creating a successful saucy photo display: